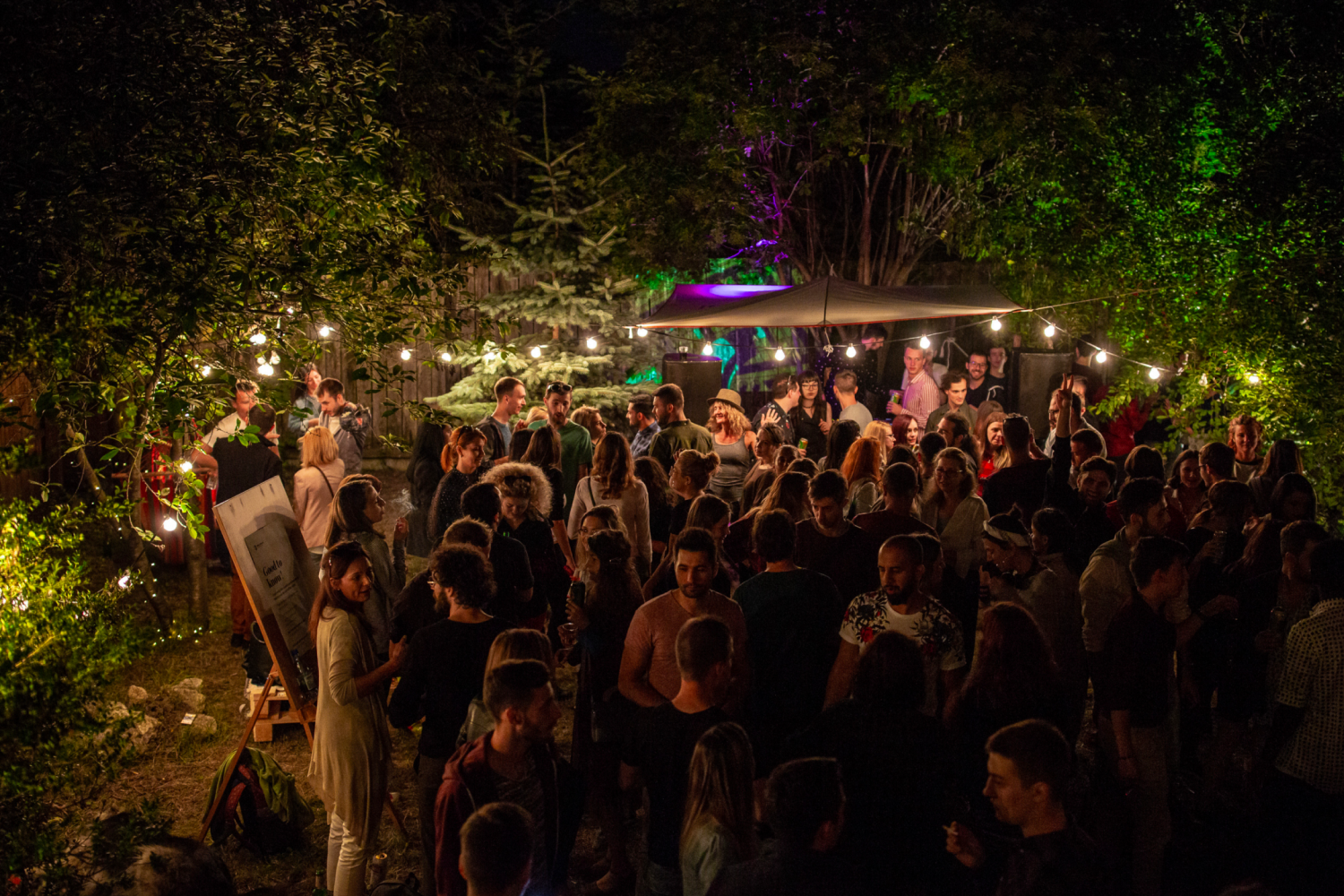 How not to die of boredom while doing HR

Alternate (boring) title: The thin line between HR and PR

When it comes to promoting the agency, we usually let our portfolio speak for itself, and it does a pretty good job.

But we do promote our job openings. And we don't just post an announcement. We brainstorm, do a hackathon, launch a campaign website, organize a fancy photo session, or throw a party for the whole city. When it comes to HR, we are bold and loud.

Stay with me to see how we erased the line between HR and PR, how we spent all our marketing money partying, and what brought us back in revenue.

We did recruiting campaigns for creatives in the last ten years, and we found out soon that the classic process doesn't work for them. You can't just post a job, share it on Facebook and LinkedIn and wait for it. The best it can happen is to find yourself buried in hundreds of irrelevant CVs and an inbox full of emails waiting for the casual "Sorry, but we don't think we match at this point".

So we decided to hack our HR process, ignoring the rules.

We're a digital agency, all right, but we took our HR campaigns into offline guerrilla posters on the walls of Brașov, and we surely made an impression.

And people notice and follow us, even if they don't get a job. They often tell us, "Oh, I saw that poster of yours downtown, and I looked you up".

“All things digital and an admirer of your work and would love just to meet (not necessarily a job).

I just wanted to throw some love to HC, for all the content you deliver. Good shit & much love!”

When does the HR process actually start?

As part of our branding strategy work, we often tell our clients something like this (and it's true, and it's significant):

Your HR process starts with your first marketing effort. It can be the website, the Instagram feed, the LinkedIn page or the sticker on your MacBook. You show yourself out there with every banner or headline. And anyone who sees you, who hears something about you, can be, at some point, your future employee. They start shaping an image about you, as a brand and as an organization, the moment they hear or read your name. That’s when the HR process begins.

We don't do interviews and rely on job posting on recruitment platforms, so how do we budget our seemingly chaotic HR efforts?

Well, we actually don't. And it makes sense. Keep scrolling.

This summer, we decided to spend our HR budget in a different way, so we threw an awesome garden party on a Wednesday evening as our primary HR campaign... or was it PR? Whatever it was, it worked. We made it an open event, we invited clients and friends, posted on Facebook, and announced a few local influencers.

We got some food, some drinks, we invited a live band and our DJ, but we also created some special stands with jobs and internship announcements for students.

Over 300 people showed up, mostly students or young creatives, and we ended up with probably the best party this city ever had on a Wednesday evening.

It was definitely a success but was it a PR move or an HR event?

Who’s in the spotlight?

You'd expect the main character in an HR campaign to be the candidate, right? Well, guess what, while writing this, I just realized, the spotlight in our HR campaigns is us, a common strategy for PR campaigns, right?

Just take a look at our recent campaign Move to Brasov.

We decided we wanted to generate awareness and encourage creatives from all across the country (or world) to join us by moving to our city. So we made a website to showcase seven (plus one) reasons to move to Brașov, each one of them saying what we do every day in our lovely Brașov.

It was a great campaign, with awards, press, over 300 CVs in two weeks and lots of social media reach. But when I look back, it resembles a PR campaign to me. A good one, by the way. Excellent job, team!

It worked, so we did it again

Less than a month ago, right after both the summer and the holiday season were gone, we were all eager to start new projects. But we still hadn't found the perfect web developer, so we launched the Back to work campaign announcing that we are actively seeking a new programmer to join our team.

We did a photo shooting with "deskmates" holding different objects representing their professional and personal character.

So we had books, cactuses, laptops, phones, stuffed animals, basketballs and so on. Who do you think we used as models? Yep, that's right. It was us again. Which, of course, makes a lot of sense. Do you like what you see? Do you think you could fit in or complete the team? Join us!

Take them out for a date?

So we don't always put the candidate in the spotlight, but when we do, we do it with style. Some years ago, we organized an HR event called The speed dating party(yes, I also realized that we like to make a party out of everything).

We are tired of job announcements, CVs, interviews, tests, tricky questions, boring answers, shirts and ties, staying in a circle and saying our names.

You will get to speed-date with each High Contrast rock star and you will have to impress us all. We will take you through marketing, PR, design, philosophy, art, technology and you will make us want you. You will have to stand out and make yourself noticed.

About fifteen people joined the event, some of them from other cities, most of them skeptical and with second thoughts after seeing the hourglasses. Well, nothing far from a first date. It was all fun and games, we met some fantastic people and even selected a group for an internship.

It was an almost-standard HR move, but the name of the event caught the interest of the press, so we got invited to talk about it on one of the most important news televisions in town. We were not allowed to mention the agency's name, but all the info needed was a Facebook search away. Some might say that it was a PR move since it was the first time we got invited to talk on a TV show about one of our campaigns.

If you ask me how we spent our marketing budget in 2017, I'll say Demisol without thinking too much about it.

Demisol is a co-working space offered by High Contrast to freelancers, students, and those looking for a place to work or willing to get in touch with other people in the creative industry.

After 15 years in the creative industry, we wanted to give something back to the local community, and most importantly, we wanted to encourage it to grow. It was a statement about the passionate and talented people in Brasov and a desire to meet them. All of them. That's the PR.

But when I sold the Demisol idea to the team, I presented it as a potential nest for recruiting creatives for the agency. It worked.

As we expected, it is most often frequented by designers, developers, illustrators, copywriters, marketing people, architects, or photographers. It is, indeed, our creative networking platform. So I guess we can all agree at this point that there is no PR move without an HR perspective. And it works the other way around, too.

That's the first thing we abandoned a long time ago.

We simply don't do interviews. We do meetings, most of the time collective meetings, where we get to see new creatives and share experiences. We do this at our office or in informal spaces, calling them "Get to know us" events.

If standard recruitment doesn't work, nor will standard selection. You can't go wild with the HR campaign and keep it cool and classy when you meet the people you want to hire. They have to experience the different view when they visit your office for the first time.

Most candidates leave the office smiling, even if we give honest, uncensored feedback on their portfolios. Some of them even exchange phone numbers or connect on Facebook to keep in touch with each other.

They will mention the meeting to their friends, even if they won't get the job. And that's PR.

When does the HR process actually end?

It doesn't. You might think that your HR responsibilities end once a former employee finds another playground in a bigger building or a fancier city. Not really.

Their opinions value more than you can imagine. And of course, it's an opinion built over the years (hopefully) or months, even before we hired them. But if you would have the chance to ask for a reference on a company from an existing employee or from a former one, who would you choose? I, personally, would be curious about what made the former one quit and how he sees things now as an outsider.

What I've noticed is that former High Contrast employees usually stay engaged. Most of them come to our events, spread some love on social media, share our content, and recommend their friends when we have job openings.

So there must be something that we are doing right. Maybe it's the HR, maybe it's the PR, or maybe we're just damn good at mixing them.

Published by Emilia in Random thoughts